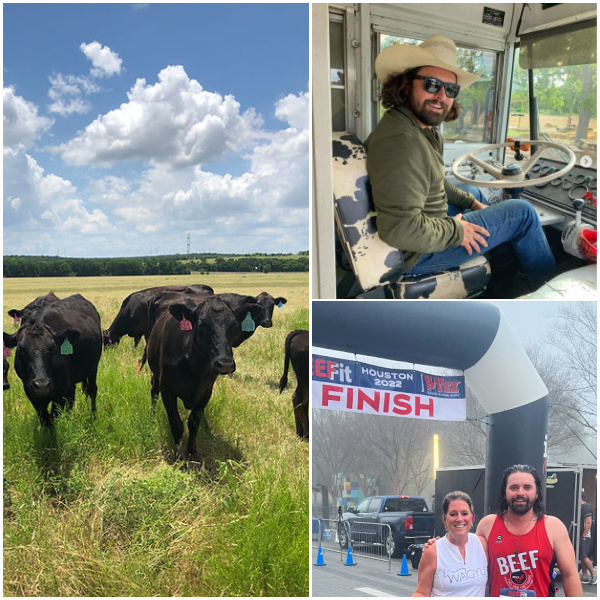 Josh Eilers of Ranger Cattle in Austin, Texas, began his successful business in 2011 during his freshman year at the University of Texas. His path into the industry and career trajectory has been anything but traditional. Josh wasn’t born into the ranching business, nor did he have any practical, hands-on agricultural experience. He just acted on a hunch, thought outside the box and always worked hard.

His work ethic and can-do attitude were honed in the military. Josh enlisted right out of high school and was trained in the prestigious U.S. Army Ranger program, serving three tours of duty in Iraq and one in Afghanistan. Among other honors, he earned a Purple Heart for injuries sustained during combat.

“Since the Army was paying for my education, I had saved up a little money to invest,” explains Josh. “I did my research, decided that Wagyu cattle would be my focus, and found a local breeder that sold me 16 heifers.”

Unsure where to put his recent cattle acquisition, Josh followed up the next day with his source who said, “call me if you ever get in a bind.”  They worked out a lease deal where Josh could keep the 16 cattle on his property. As the herd size continued to increase, to 60 by the time Josh graduated from college and about 700 today, he was connected to additional lease deals with real estate developers in various locations around the outskirts of Austin. A win-win for everyone involved. A real estate developer could obtain an agricultural tax exemption status with Josh’s cattle grazing on their property and Josh could afford to continue and expand his passion for ranching across more than 3,000 acres in Austin.

Ranger Cattle is also involved in seedstock services to further the Wagyu breed, a livestock auction business, and also operates as part of a ranching co-op where they run another 2,000 head of cattle. Their pasture-raised Wagyu beef is sold at their ranch and marketed in a variety of ways including a ranch-to-restaurant model as well as online orders, farmer’s markets, and cooking classes and social events held on the property. In the last month, Josh also opened Ranger Burger, modern and energetic take on a neighborhood burger joint, located at The Pitch, a sports, dining and entertainment destination in northeast Austin.

Josh calls his work “sexy” but completely all-encompassing. “It’s more like a lifestyle, than a job. I have no hobbies,” he chuckles. “I might be at a trade show or actually working in the field. Or, I might be flying a helicopter to check out cattle deals or entertaining top chefs interested in our beef. I love it all.”

Read on to learn more about Josh, ranching and life in his own words.

School Days: I started Ranger Cattle on the front end of college and knew little about business. My senior year, I signed up for an entrepreneurship class. Instead of a hypothetical group project, I pitched a case study of Ranger Cattle with four other classmates.  They came up with some awesome ideas that are still used today. For example, we use a barley by-product (high protein) from producers in the local craft beer scene and mix it into the cattle feed. This not only saves me money, but helps create a more sustainable environment.

My Mentor: It was during the early days of Ranger Cattle that I met Bubba Kay, an accomplished Wagyu breeder, who still acts today as an invaluable mentor in my life. He has literally taught me everything from how to dehorn a calf to what to look for in bloodlines. I talk to him every day and consider him a grandfather figure in my life and consider the relationship priceless.

Pandemic Survival: During the COVID-19 situation, we had to come up with some creative ways to keep the business afloat. Since restaurants weren’t open, we did events like chili fests, cooking competitions, opened tasting room and had drive-in movie nights to get people out (in fresh air) and interested in our beef.

Hardest Part of Job: The toughest thing is just keeping it all going financially. Beef can be a very volatile industry that is also extremely capital intensive with long return on investments. Currently, we are dealing with skyrocketing diesel prices and the tripled cost of moving cattle (already purchased) by freight.

Beef Team: I am a member of the Texas Beef Team! I joined in 2018 after an impromptu run of the Austin Marathon with a really cool group I met while giving a talk at the pre-race dinner! I really love wearing that Fueled by Beef jersey, it’s so awesome. In February, I ran the BEEFit 5k at the Cattle Industry Convention and NCBA Trade Show in Houston.

You Might Not Know: I recently appeared on the Netflix series, Queer Eye (season six), which aired in late 2021. The “Fab Five,” gave me a lifestyle makeover and one of the coolest parts was the total redo of the shipping container I live in while on the ranch into an amazing living space.